You can still browse our resources whilst you wait. A pop up chat window will appear once one of the Proud Connection team is available.

Why not explore our word of the day:

What is ‘Coming Out’?

There is not one way or a ‘correct’ way for an LGBT+ person to come out. It can be terrifying coming out to the people you care about most and so people may choose the method they feel most comfortable using. An LGBT+ person may share their identity with you by asking for a serious one-to-one conversation, they may call or text you, they may write a letter, etc. Do not expect it to ‘look’ a certain way.

Coming out is not something that LGBT+ people do once. LGBT+ people continue to come out throughout their lives as they make new friends, start new jobs, get new neighbours, etc. It does not necessarily ‘get easier with practice’, rather you become more prepared in what to say and how you want to answer questions from others as an LGBT+ person, and as you meet new people, their opinions may matter less as you do not have a close relationship with them.

Why Do People ‘Come Out’? 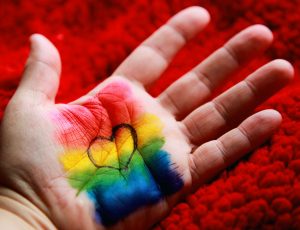 We live in a society where it is assumed everyone is straight and cisgender unless told otherwise. Because of this, day-to-day assumptions are made about our identity and the identity of the people we are attracted to. Being surrounded by people who believe you are straight and/or cis when you know you are LGBT+ can feel like you are hiding a part of yourself; it can feel like you are lying all the time to the people you care about most, and it can sit like a heavy weight on your shoulders. All of this may negatively impact upon a person’s wellbeing. Because of this, many LGBT+ people choose to share their identity with their family and friends by ‘coming out’.

When you first meet an LGBT+ person, they may share their sexual orientation or gender identity with you unprompted. This may be so that, going forward, you do not misgender them or make any incorrect assumptions about their identity that they would later have to correct.

When do LGBT+ People Come Out?

Some people may come out as they question and explore their identity. Some people are very young and some come out years after realising they are LGBT+. There is not a set time for people to share that they are LGBT+. Coming out is a personal choice and people may come out as and when they feel ready to do so. But LGBT+ people are more likely to come out if they feel supported, safe and they know the people around them respect LGBT+ identities.

Let us know your thoughts!

We are always looking to improve our resources and website content, so please spare a few moments to let us know how you are finding our resources. We have 6 short questions which should only take a couple of minutes to complete and will be really useful for us when developing these and future resources.